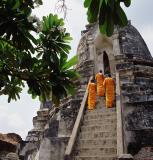 Thailand food
It is beyond any doubt that food is a part of any gathering, thus, becoming the part of social occasions or itself the reason to celebrate. Normally, as per the western culture, a normal meal in any restaurant consists of starter, main course and then dessert. But in Thailand, the custom is a bit different with regard to Thailand food, as there is no single dish for a single person. As a general, all present in a gathering share the same dish together. So, it’s better to have many guests together around the table than to enjoy with one or two as eating alone is considered a bad luck in the country.

One of the good things about Thai food is that they never dispose away the leftover food, as they consider it inauspicious and an enraging act to a female deity, ‘God of rice’. Generally there are four seasonings in Thailand food- sweet, sour, salty and spicy. The food is satisfied only if it contains all the four tastes. Thai dinner mostly include meat, fish, noodles, vegetables and soup followed by desserts including fresh fruits and colorful rice cakes. Besides meals, there are snackers consisting of chicken or beef satay, spring rolls, salads, raw vegetable with spicy dips and sweets.

Thailand culture
Thailand culture is highly influenced by Buddhism in addition to some influence of Hinduism and other Southeast Asian neighbor. Thai art is the main item included in Thai Culture. Buddha image is the main constituent in different period having distinctive styles. At present, there is a fusion of traditional art with modern techniques. India has also laid much influence on Thailand literature. It includes the most notable work, Ramakien, the version of Indian epic, Ramayana. The poetry of Sunthorn Phu is also quite famous in Thailand.

Spoken drama is not given any importance in Thailand, but instead there is Thai dance, divided into three categories- Lakhon, Likay and Khon. A form of shadow pay, Nang Drama, is popular among southern Thailand. Folk music and classical music both are have their significance in addition to pop music.

Apart from it, one of the common customs included in Thailand is Wai, a common gesture that is similar to Indian Namaste. The hospitable and generous people of Thailand pay a lot of respect and homage to their elders, as it is the core of their faith and spiritual belief. Seeking blessings from the elders is considered important mark of respect.