Festivals are among a tourist destination’s major attractions. Some travelers often schedule their trips to their favorite destinations in time to attend the festival. 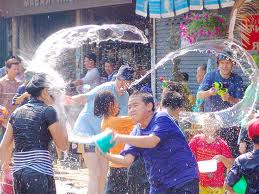 Thailand has its share of festivals and one of them is the Songkran Water Festival, the biggest celebration in the country and undoubtedly, the world’s largest water fight. This is a fun and very kid-friendly activity as people go out to the streets bringing along their squirt guns, buckets and hoses to engage in a water fight.

This activity often associated with kids describes the Songkran or the New Year celebration of the Thais. The festival takes place in April of each year and this 2013, it will happen on April 13 to 15.

The Songkran Water Festival is an old tradition in time for the period considered by Buddhists as a time for cleansing and renewal. And water is normally a major part of this ritual. Some traditional acts done by the Thais to observe the festival are cleaning their homes, washing the Buddha statues with scented water and pouring of water over the hands of the elders.

In addition to its religious influence, however, many people see this festival as an opportunity to get wet and cool down during a hot season. April in Thailand is said to be the hottest month of the year. As such, it is okay to splash water to people including strangers in a fun way. This act signifies good luck as the new year starts by washing away the bad thoughts and actions of people.