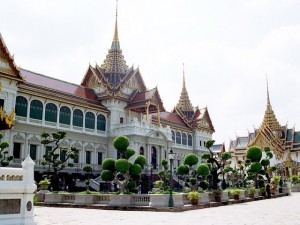 The biggest temple is in the capital of Bangkok and is known as Wat Pho. It is where the unique and biggest reclining Buddha statue can be found. Apart from its out of the normal position, what makes this statue different from the others is that its body is made from gold leaf while the 46-meter-long feet are adorned with mother-of-pearl which symbolize the 108 signs of the Buddha.

The Wat Pho or Wat Phra Chetuphon temple is located on Sanam Chai Road and Maharaj road next to the Grand Palace. It is here in the palace during his reign that King Rama I recognized the religious significance of the old temple and ordered its restoration in 1788. Did you know that it took 7 years and nearly 6 months for the first restoration works to complete?

The second renovation took place during the reign of King Rama III and took longer to complete. How much longer? The expansion lasted for 16 years and seven months.

Another feature of this temple is the prestigious massage school in Thailand. The school has been training Thai masseurs since 1955 and welcomes visitors who want to pamper themselves with a traditional Thai massage. Short and long term courses are also available for those who want to learn the right techniques.